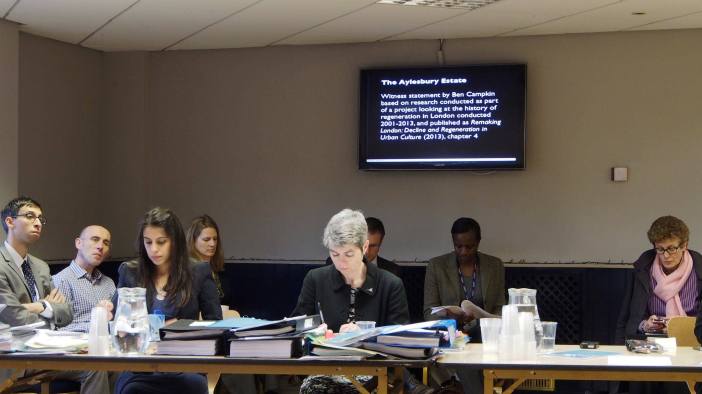 A lot has been written already about Friday’s decision by the Secretary of State for Communities and Local Government, Sajid Javid, to accept the Government Inspector’s recommendation not to confirm Southwark Labour Council’s Compulsory Purchase Order on the homes of leaseholders on the First Development Site of the Aylesbury Estate regeneration. But in the understandable excitement at this rare victory, not all of it has been accurate. The London News even printed an article by Toby Porter, a former journalist for the Daily Mail, that confused the objections raised by leaseholders with the reasons why the Secretary of State has refused the Compulsory Purchase Order.

As the letter from the Department for Communities and Local Government shows, most of the objections the leaseholders raised have in fact been rejected by the Secretary of State – specifically:

So despite initial appearances to the contrary, the former Managing Director of Deutsche Bank hasn’t developed a sudden concern about the social cleansing of London’s council estates. The actual reasons the current Secretary of State gives for refusing the Compulsory Purchase Order are listed in the letter under the following paragraphs:

To clarify these last two reasons, under the European Convention on Human Rights to which the Secretary of State refers, everyone has: ‘the right to respect for his private and family life, his home and his correspondence’ (Article 8); and ‘is entitled to the peaceful enjoyment of his possessions’ (Protocol 1).

Under Section 149 of the Equality Act 2010, from which the ‘Public Sector Equality Duty’ arises, this consideration – which goes on to make particular reference to the age and ethnicity of the leaseholders and the disproportionate negative effects the Compulsory Purchase Order will have on elderly residents unable to stay in the area, children forced into new schools, and residents from black and ethnic minorities separated from their cultural communities – makes up by far the largest section of the letter, and has the most potential for all residents’ rights. However, its implications are qualified by the following statement, which is much more in keeping with the considerations of a Tory Minister:

All of which leads the Secretary of State to the following conclusion:

So, in a further effort at reaching ‘agreement’, we can expect Notting Hill Housing Association to throw a large amount of money at the leaseholders to compensate them for their relinquished human rights, and in doing so relieve Southwark Labour Council of its duty to public sector equality. As the letter states very clearly:

Which I believe in legal terms is what’s called ‘passing the buck’.

However, the power of leaseholders over their homes has been greatly increased, which definitely makes this decision a victory for those fighting the demolition of their homes. But we should be clear about exactly what that victory is based on, which is the property rights of leaseholders, not what some of us mistakenly understand by human rights. If nothing else, the increased compensation leaseholders can demand might make developers and housing associations like Notting Hill Housing think twice about getting councils to issue Compulsory Purchase Orders.

But potentially the most useful part of this document is the long section on Public Sector Equality Duty (paragraphs 23-33). Here the considerations of the Secretary of State this duty gives rise to are only sited in the context of the leaseholders who made their objections to his Department; but there is an argument to be made that the negative effects of being moved away from community support networks are just as applicable to tenants, and that simply re-housing them elsewhere doesn’t mitigate those effects.

This is, perhaps, where the real victory lies in this decision by the Secretary of State: not in the property rights of leaseholders, but in the potential for articulating the human rights of all residents whose homes are threatened by estate demolition schemes. Article 8 of the European Convention on Human Rights, to which the Secretary of State refers, protects a person’s ‘right to respect for his private and family life, his home.’ This opens the possibility to argue that, even though they don’t own the property, a tenant’s council flat is their home, and therefore that its demolition, their eviction from it and relocation to a new property against their will, is an infringement of their human rights to respect for that home.

The other opportunities this decision opens to those of us fighting estate demolition schemes is that if councils can be compelled to consider arguments for the viability of refurbishment – which Southwark Labour Council did not for the Aylesbury Estate – and alternatives to demolition are proposed before planning permission is granted, then the Secretary of State is under obligation to consider them, or at least to consider why a given council didn’t consider them, or at least to consider their considerations. Unfortunately, by the time objections to a Compulsory Purchase Order get to his Department, planning permission will already have been granted; and challenges to whether councils have genuinely considered options other than demolition properly belong in judicial reviews by the High Court. But in our own struggle against Lambeth Labour Council, ASH are in the process of showing that their rejection of our proposed alternatives to the demolition of Central Hill Estate was based on fabricated figures, false evaluations, deliberate misunderstandings and a complete refusal to engage with us. So we imagine that they, and other Labour Councils implementing estate demolition schemes across London’s boroughs, will be studying the Secretary of State’s decision closely.

As to why he made it, perhaps the Tory Government is worried about the growing power of Labour Councils in London, which – as the July Progress Conference held by the right-wing Labour cabal demonstrated – is where the Labour Party sees its future power base over the next decade. Perhaps another, wealthier, more powerful developer wants a cut of the Aylesbury pie, and convinced the Secretary of State to scare Notting Hill Housing Association away. Who knows? But a precedent has been set, and we need to use it to save the homes not only of leaseholders, but also of the tenants that make up the majority of residents on London’s housing estates, and who – not because of their age, disability, gender reassignment, pregnancy, maternity, race, religion, sex or sexual orientation (all of which are protected against discrimination by the Equality Act), but because of their poverty (which isn’t) – are disproportionately and negatively effected by an estate demolition programme that is socially cleansing the working class from London.

Architects for Social Housing is a Community Interest Company (no. 10383452). Although we do occasionally receive minimal fees for our design work, the majority of what we do is unpaid and we have no source of public funding. If you would like to support our work, you can make a donation through PayPal:

2 thoughts on “Financial Compensation for Human Rights: The Aylesbury Estate”