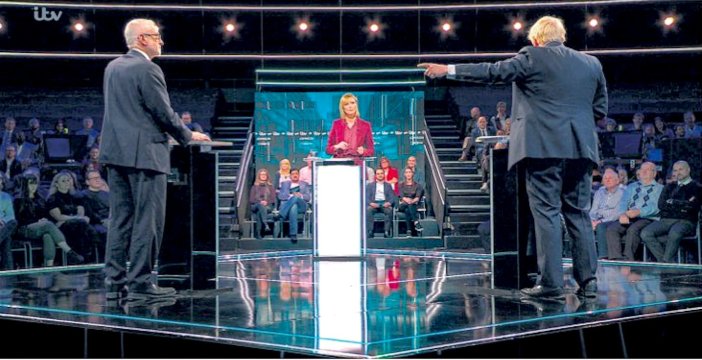 I got through about 30 seconds of the Johnson-Corbyn ‘debate’ last night before I had to turn it off. In actuality, my computer turned itself off, as if the GCHQ camera hidden in its screen responded to the look on my face. My first reaction was one of shame, like watching two naked old men being forced to wrestle in a pig-sty for the amusement of the baying masses. It was so demeaning to the participants, it felt demeaning for me to participate in this spectacle in which the potential future leaders of the country were interrogated and prodded and interrupted and heckled as if on some dystopian game show in a film based on a book by Philip K. Dick.

But what struck me next is that — although Johnson has spoken like this his whole life, bred as he was in the stables of Eton and Oxford — I can still remember how Corbyn spoke when he was first elected Leader of the Labour Party back in September 2015. He’s never been much of an orator, and over the past four years he’s proved to be an extraordinarily weak leader; but in his crumpled suit and open-neck shirt he at least sounded like he spoke in his own voice, even if he mistook standing nobly at the despatch box as the Conservatives insulted him for a political position.

But for some time now he’s been wearing that smart new suit and tie Cameron told him to wear, as if he were a public-school prefect admonishing a new boy. And he now resembles nothing so much as one of those Thunderbirds puppets in his gestures and speech. Everything’s been so rehearsed that one expects to see a wind-up key sticking out his back, and for the studio lights to catch the wires attaching him to his masters. And while he continues to parrot the worn-out squawk about ‘the many’, he’s learned his lessons well, and every question about Brexit, or housing, or homelessness, or the NHS, or nationalisation of industries, or Palestine, or anti-semitism, or Julian Assange, or the British monarchy, or the Trident nuclear programme, or anything about which he once sounded at least like a social democrat — if never the socialist he’s depicted as by both the right and the left — now draws forth the bland, politically-correct, audience-tested, Twitter-generated, Official Position of the Labour propaganda machine. You can almost see him pause as the Terminator-like screen in what was once his brain scrolls through the possible replies:

‘We know, Mr. Corbyn, there are big questions about anti-semitism within Labour. The Board of Deputies of British Jews has said: “You and your allies are responsible for turning a once great Party into a cesspit of anti-semitism”. Can you take some responsibility for the way the debate has turned in this country?’

> ‘Criticising and denouncing the illegality and immorality of the actions of the State of Israel when they are in contravention of international law and the Universal Declaration of Human Rights to which the UK is a signatory is not anti-semitic.
> ‘Zionism is a racist ideology founded on the progressive annihilation of the Palestinian and Bedouin people and theft of their land.
> ‘The accusations of anti-semitism against me personally are a transparent attempt by the Neo-liberal ideologues that rule our media to equate socialist economic policies with racism.
> ‘Anti-semitism is an absolute evil and scourge within our society. I have taken action in my Party, and when anyone has committed any anti-semitic acts or made any anti-semitic statements, they are either suspended or expelled from the Party. We take this very, very seriously indeed.’

Guess which response the Corbyn-cyborg chose?

From the response to my recent gentle reminders of what the Labour Party has been up to over the past five years and three General Elections since Corbyn was elected Leader with the greatest mandate in its history, I take it there is a degree of frustration at the inconvenience of being confronted with these facts when desperately trying to believe in Our Saviour (which art in Parliament). But perhaps, instead of counting our rosary beads, we might reflect on how we can move beyond this farcical presentation of a so-called ‘choice’ between two differently-styled puppets of Neo-liberalism and US imperialism, and start building a political movement of and for the working class. Because if we accept last night’s degrading spectacle as the limits of our political ambitions in the UK, then we really are lost.

One thought on “Running Man: The Johnson-Corbyn ‘Debate’”